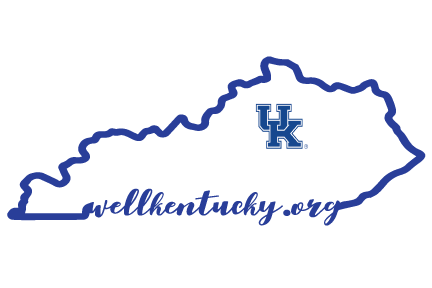 Home Overcome Drained?: How to sync your sleep & life

Rate this article and enter to win
Have you ever struggled to stay awake in your 9 a.m. class, and wondered why? Let’s say you slept for six hours—below the recommended number, but you might think it would be enough to keep you functioning until your afternoon emergency nap.

Not necessarily. How many hours you sleep matters, of course—a lot. But that’s not the only way sleep influences your functioning the next day (like being able to pick up where you left off in pre-calc, put in a half-decent performance at volleyball, and remember to wish your dad a happy birthday).

When you sleep may influence your academic performance even more than sleep duration does, research suggests. That’s because sleep isn’t just one experience affecting your body and brain; it’s a sequence of experiences that meet various physical, emotional, and intellectual needs. Combined, these stages are known as the sleep cycle. When you disrupt your sleep cycle, you’ll feel it, even if you’re getting the “right” total number of hours. Sleeping three hours at night and four in the afternoon, for example, is not equivalent to sleeping seven hours consecutively. (Also: The recommended number of hours for young adults is 8–9 ¼, according to the National Sleep Foundation.)

“Greg,” a second-year undergraduate at American University, DC, went to his health center because he couldn’t get to sleep at night. Greg told Dr. Reitman, the medical director, that he fell asleep every night around 3 a.m. and got up at 8 a.m. for his
9 a.m. class. He drank coffee to stay awake and took a 2–3 hour nap after lunch. On weekends, he stayed out with his friends until 3 a.m. then slept until 1 p.m.

Diagnosis: Greg had a classic case of delayed sleep phase syndrome (DSPS). DSPS is seen in 17 percent of college students, and is characterized by a disconnect between sleep habits and societal demands, like getting up for school or work (“social jet lag”). Greg was not getting enough deep restorative sleep or REM sleep to function properly during the day.

“Greg didn’t have an underlying sleep disorder. He had poor sleep habits. If you take a nap for three hours a day, you are not going to be tired at 11 p.m. And with only five hours of sleep at night, you are interfering with the sleep cycle,” says Dr. Reitman. Even after adding three hours in the afternoon, Greg will likely miss out on deep sleep and REM sleep.

We have all felt the pain of fragmented sleep after our night has been seriously interrupted. Our morning grogginess—also known as sleep inertia—is a liability. We cut ourselves shaving, we spill our coffee, we dump our adorable partner. Our memory, alertness, reaction time, and decision making are well below where we’d like them to be. Sleep inertia can last far longer than we might realize: two to four hours, according to researchers at Harvard Medical School. You’re likely to be less perceptive and attentive in class. You may struggle to understand why your male Spanish teacher will never be embarazada. (It’s because this means pregnant, not embarrassed.) You may be irritable and not much fun to be around.

How about social jet lag?

If your natural wake time is routinely out of sync with the time that society (e.g., your class schedule) tells you to get up, you are likely suffering from social jet lag. In a 2000 study in the Journal of American College Health, students with an irregular sleep pattern performed worse academically than their peers, even when they slept the same total number of hours.

“For college students, the worst impact of inadequate sleep is the hit to their memory and learning,” says Dr. Shelley Hershner, a sleep specialist and assistant professor of neurology, University of Michigan. In a 2014 national survey, more than half of college students reported significant daytime sleepiness, and two in three felt sleepiness hurt their academic performance (American College Health Association’s National College Health Assessment). Sleep deprivation and disruption is among the top three causes of poor academic performance, along with stress and anxiety (which are also associated with disrupted sleep).

In studies, irregular sleep patterns, later bedtimes, and later wake-up times are associated with lower GPAs. Some evidence suggests that memory formation may be prompted by deep sleep (the third stage) and then consolidated by Rapid Eye Movement (REM) sleep, helping to explain why we need those sequential stages. “If you disrupt the natural sleep cycle, you will pay for it, either through being tired, getting poor grades, or even depression,” says Dr. David Reitman, medical director of the student health center at American University, DC.

What does sleep disruption do to us?

Not so smart after all: Memories of what you learned and experienced yesterday are consolidated during REM sleep. Deep sleep may also be involved in this process. Disrupted sleep means disrupted learning.

Difficulty with weight management: Sleep disruption affects the hormones that regulate hunger as well as our level of physical activity. Recurrent sleep deprivation increases our desire for high-calorie foods and may make us more prone to weight gain, research suggests. A 2006 study found that each hour of social jet lag was associated with a 33 percent higher risk of obesity.

Infections: Ongoing sleep deprivation and disruption are associated with weakened immune function, potentially leaving us less able to fight off viruses like the common cold.

Temptation to drink and smoke: Social jet lag is a risk factor for more than academic failure; it can also lead to increased use of alcohol, cigarettes, and caffeine, according to a 2006 study in Chronobiology International.

Accident-prone: Sleep-deprived drivers are less attentive, with slower reaction times and impaired judgment. In a 2010 study involving 1,039 undergraduates, one in six said they had fallen asleep while driving, according to the Journal of Adolescent Health.

Sexual slump: Sleep-deprived men and women report lower libidos and less interest in sex. In a 2015 study of college students, well-slept women had more sex than did tired women, according to the Journal of Sexual Medicine. In a 2011 study, ten male college students restricted their sleep to five hours a night for just one week, resulting in decreased testosterone; symptoms of testosterone deficiency include reduced libido, low energy, and difficulty concentrating.

Chronic disease and shortened life span: People who routinely get less than six hours of sleep a night are at increased risk of dying prematurely, according to a 2010 analysis of multiple studies in the journal Sleep. The less you sleep, the more likely you are to develop diabetes, obesity, and hypertension.

How to fix your sleep

The number-one sleep complaint of students is being tired, says Dr. David Reitman, medical director of the student health center at American University, DC. “Although some students do have underlying sleep disorders, 85 percent of tiredness is caused by poor sleep habits: too much caffeine, napping during the day, using cell phones, or being online late at night. All of these can interrupt your sleep, but they are all correctable habits.”

The key to sleeping well is synchronizing your sleep and wakefulness with natural darkness and light. This way, you can avoid sleep inertia and social jetlag. Here’s how:

In general, your cell phone is the enemy of your sleep; texts and SnapChat are just too tempting. But your phone can perhaps be redeemed through the strategic use of an app that tracks your sleep and gives you feedback on your habits. Sleep doctors are divided on how useful these apps are; see what works for you.

Pros
“Sleep apps are evolving. They are getting better all the time. What they measure is activities related to sleep, such as movement in bed and whether you are snoring. The rise of sleep apps shows me that people are more aware and concerned about their sleep, and that’s a good thing. And one day we will have sleep apps that will really measure sleep (by evaluating brain activity).”
—Dr. Nathaniel Watson, president of the American Academy of Sleep Medicine (AASM); associate professor of neurology at the University of Washington; and codirector of the UW Medicine Sleep Center

Cons
“My patients bring in their cell phones or recordings of them snoring. Many are anxious because the app tells them they have a sleep disorder, or are relieved because they don’t think they have sleep apnea because the app says they don’t snore. To me, the results are pretty meaningless for diagnosis. And there are confounding factors [that can contribute to misleading results] if the patient doesn’t sleep alone or there is ambient noise.”
—Dr. Steven Park, assistant professor at the Department of Otorhinolaryngology—Head & Neck Surgery, Albert Einstein College of Medicine, New York; author of Sleep, Interrupted (Jodev Press, 2012)

Sleep Cycle Alarm Clock wakes you when you’re in your lightest stage of sleep.

SleepBot tracks your sleep and offers alarms and auto-settings for improving it.

Some fitness trackers can provide information on how you’re sleeping; the most popular include Basis, Jawbone’s Up app, and Fitbit. 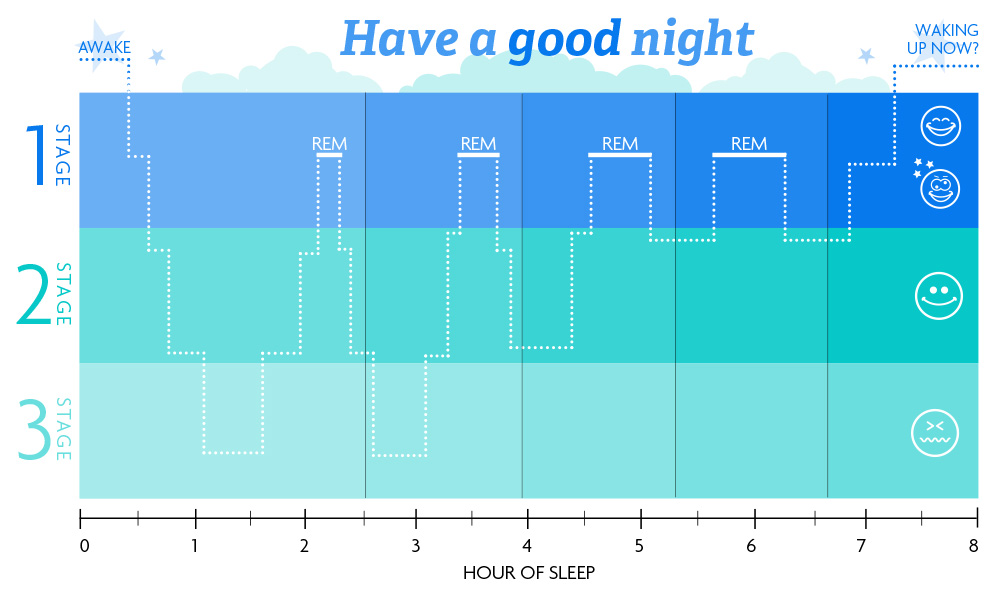 A single sleep cycle lasts 1 ½–2 hours. It involves three stages of Non-Rapid Eye Movement (NREM) sleep—including deep sleep (Stage 3)—and one stage of rapid eye movement (REM) sleep, in which our brains are most active, according to the American Academy of Sleep Medicine.

"This app is basically an alarm clock on steroids—magical steroids designed to help you get the sleep you deserve. Select what time you want to wake up and then click on ‘going to sleep’ before you doze off.”

Useful?
If you’re someone who needs to slam a 44 oz. frappe to get your day started, this could be your alternative.
Rating: 4.5 / 5

Fun?
If getting good sleep isn’t fun to you than maybe you’re too cool for this app. JK—download it now!
Rating: 3.5 / 5

Effective?
I finally understand the meaning of beauty sleep. I wonder how long Channing Tatum has been using this. #ladykiller
Rating: 5 / 5

Get help or find out more

The drive to sleep and our internal clock: Harvard Medical School 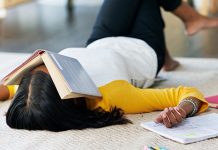 Ask the doc: “How can I stay awake in class or while studying?” 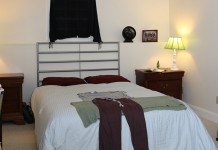 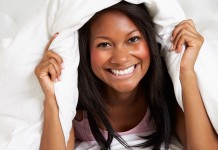